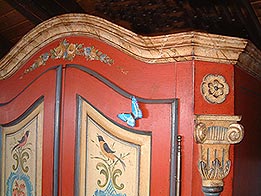 The story of the Trentino Region decorated furniture begins in the seventeenth century when can be seen a period of changes in this furniture structure, that begin to move towards size and style more suited to a more privacy, abandoning, gradually, the outstanding and impressive features of the sixteenth century.

In fact, in the seventeenth century, the first examples of wedding boxes decorated, made their appearance in the valleys of Trentino. 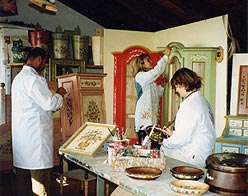 The first decorations can be glimpsed during the Renaissance, a period, where the shapes of such complements are beginning to change and evolve into new forms and accessories such as bookcases, desks or bedside tables.

The early decorators began reproducing the fake marble and fake walnut, and then had the upper hand the flower texture. In many examples, in the panels we find the vase from which emerge stems of red roses, while the bottom is always in light blue.

The bouquets are the latest extremities of the plant and recall the concept of the life-tree.
The decorated chests were realized in Swiss pine wood, walnut or fir.
The artists painted panels and rosettes with tempera, preceded by thin films of rabbit glue, or encaustic (vegetable based).

The design of furniture, in Italy, has always been very important, but, it is especially in the second half of the twentieth century that the furniture acquires a value of greater importance primarily as a quality and image.

On this website we use first or third-party tools that store small files (cookie) on your device. Cookies are normally used to allow the site to run properly (technical cookies), to generate navigation usage reports (statistics cookies) and to suitable advertise our services/products (profiling cookies). We can directly use technical cookies, but you have the right to choose whether or not to enable statistical and profiling cookies. Enabling these cookies, you help us to offer you a better experience.